With my bald head, I’m keenly aware of my risk for skin cancer, specifically malignant melanoma. Unfortunately, our canine companions can develop this cancer too. This cancer is quite aggressive, so I wanted to share information with pet parents to raise awareness. Please consider sharing with other dog parents you know. Happy reading! 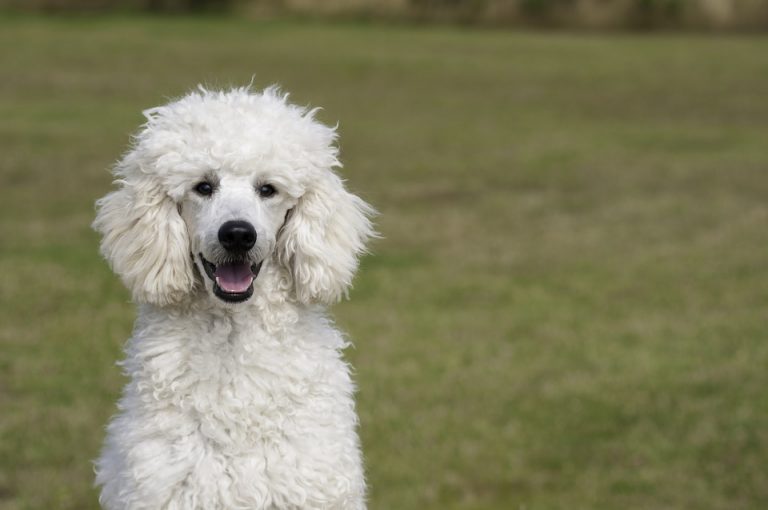 Malignant Melanoma – What is it?

Malignant melanoma are tumors of pigment-containing cells called melanocytes. As such, these tumors are commonly found where there is pigment – skin, hair, and the eyes. Veterinarians don’t currently know what triggers malignant melanoma to form. Some have suggested trauma, possibly excessive licking of a particular body part, and even stress may stimulate cells to randomly multiply. By doing so, there is the potential random mutations that result in the formation of cancer cells. Interestingly, sun exposure does not appear to induce melanoma in our canine companions. The most common forms of malignant melanoma: 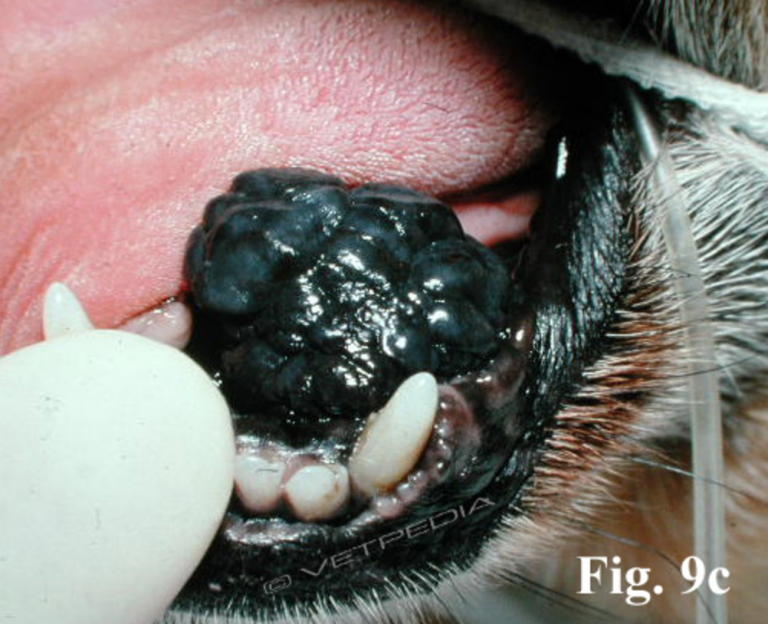 Oral malignant melanoma in a dog. Photo courtesy of VetPedia

Malignant melanoma can also occur in the eye, gastrointestinal tract, and mucocutaneous junctions. This cancer typically occurs in older dogs, and some breeds are over-represented:

The oral and skin forms are typically highly pigmented (brown to black), raised masses. Interestingly, approximately one third of melanoma are completely devoid of dark discoloration and appear like normal pink/tan skin. They can be found in the gingiva/gums (42-63%), lips (15-33%), hard & soft palate (10-16%), and tongue (1.5-3.3%). Oral malignant melanomas are often associated with halitosis (bad breath), ptylasim (excessive drooling), dysphagia (difficulty swallowing), and abnormal breathing noises (i.e.: stertor, stridor). Malignant melanoma of the digit/toe typically causes swelling of the involved toe, as well as loosening of the associated nail and lameness on that leg. 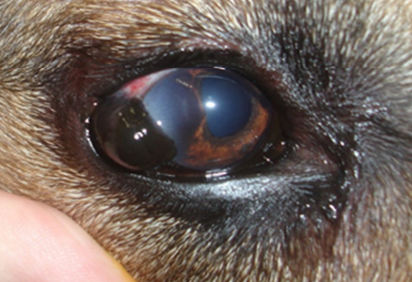 An ocular malignant melanoma in a dog. Photo courtesy of Dr. A Nishiya

Malignant Melanoma – How is it diagnosed?

Early diagnosis is essential. In a previous blog, I have emphasized the concept of #SeeSomethingDoSomething initiated by board-certified veterinary oncologist, Dr. Sue Ettinger (DrSueCancerVet). For example, any skin mass that has been present for more than one month and/or is larger than the size of a pea should be evaluated by a veterinarian. This evaluation should include either aspiration or biopsy of the mass. No veterinarian can simply look or touch a skin mass and know what it is. As Dr. Ettinger advocates, #WhyWaitAspirate!

An aspiration involves inserting a vaccine-sized needle into the tumor and removing some cells. Aspirating skin masses does not typically require sedation, but sampling from an oral often requires sedation. The aspirated cells should be evaluated by a board-certified veterinary clinical pathologist to obtain a definitive diagnosis. The evaluation of the aspirated cells is called cytology. Occasionally, cytology is not diagnostic. In such cases, a surgical biopsy is required to obtain a definitive diagnosis.

Once a malignant melanoma has been confirmed, some additional non-invasive testing is recommended to determine how involved the body is with the cancerous process. These tests include:

The above described testing is called staging, and staging helps veterinarians determine how advanced a pet’s cancer is. Most importantly, the results of staging diagnostics can provide information about a pet’s prognosis, and thus can be quite helpful to both veterinarians and pet parents. For example, oral malignant melanoma has four stages:

Malignant Melanoma – How is it treated?

Malignant melanoma may be treated with surgery, radiation therapy, and chemotherapy. I like to think of treatment as having two components:

To achieve the first goal of local control, aggressive surgery is indicated. Such an intervention allows – in most cases – removal of the tumor from its current location. For example, skin masses should be removed whenever possible. Amputation of an affected digit is recommended. Oral surgery may involve removal of part of the jaw. This is understandably an unsettling proposition for many pet parents. Happily, more than 85% of patients undergoing such surgeries have satisfactory functional and cosmetic outcomes. The reported median survival times oral malignant melanoma following surgery are:

Dogs with digit malignant melanoma without lymph node involvement or distant metastasis treated with toe amputation have a reported median survival time of ~12 months. In previous studies, approximately 42-57% were alive at one year and 11-13% were alive at two years. Pet parents are encouraged to collaborate with board-certified veterinary surgeons to ensure the most appropriate surgical approaches are taken to achieve local control. 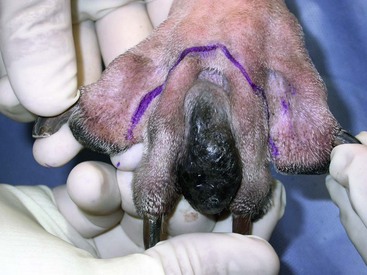 Pre-surgical picture of malignant melanoma of a digit in a dog. Photo courtesy of Dr. P Bergman

Unfortunately, surgery is not an option for some patients. In others, malignant melanoma can’t be completely excised via surgery due to their location. For these patients, radiation therapy is a helpful therapeutic adjunct. Radiation therapy has been associated with partial and complete response rates of 25-30% and 53-69% respectively. Reported median survival times were 5-8 months.

Once local control of malignant melanoma has been achieved as best as possible, effort should be put forth to prevent (or at least try to slow down) the spread of the cancer. Such an effort is also indicated for patients who are not candidates for surgery and for those who had malignant melanoma that could not be completely removed with surgery. The biggest question is how to achieve this goal of systemic control. The use of chemotherapy to achieve systemic control is controversial. Chemotherapy treatments may include:

To date, response rates to chemotherapy have been low and inconsistent. Perhaps most importantly, there is little evidence chemotherapy improves survival time. Pet parents will likely find it helpful to consult with a board-certified veterinary oncologist to determine if chemotherapy is appropriate for their fur babies.

Malignant Melanoma – Are there any new treatments?

A novel treatment using a special vaccine (Oncept™) has been approved to treat dogs with Stage II and III oral malignant melanoma after achieving local and regional control with surgery and/or radiation therapy. The vaccine has also been used to treat patients with malignant melanoma of the digits. The vaccine contains DNA to leads to the production of a unique protein called human tyrosinase. Tyrosinase is involved with pigment (melanin) formation in normal pigment cells and melanoma. When human tyrosinase is injected into a dog, the immune system identifies it as a non-dog substance. It is a foreign substance, and the immune system responds accordingly. Human and dog tyrosinase molecules are quite similar. Therefore, the immune response that attacks the injected human tyrosinase also attacks dog tyrosinase in malignant melanoma. 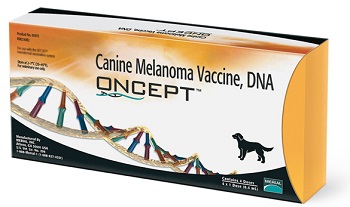 A multi-centered study showed survival time in dogs with Stage II or Stage III oral malignant melanoma with local/regional control that was received the vaccine was significantly longer than those not treated with the vaccine. In fact, the median survival time could not be determined because too few died of their died before the end of the study. Dogs with digital malignant melanoma treated with both surgery (for local control) and the melanoma vaccine had a median survival time of 476 days. The presence of metastasis was associated with a worse outcome – 533 days without and 105 days with metastasis. The melanoma vaccine is only available through board-certified veterinary oncologists and internal medicine specialists.

The take-away message about malignant melanoma in dogs…

Malignant melanoma is an aggressive cancer in dogs that most commonly occurs in the oral cavity, skin, and digits/toes. Early identification followed by initial aggressive local/regional control with surgery and/or radiation therapy is of paramount importance. Adjuvant therapies, including treatment with the melanoma vaccine, may confer a survival benefit.