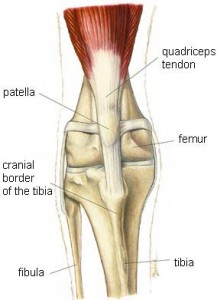 Occasionally the cranial cruciate ligament is injured after a pet abruptly changes direction while exercising/running – think Doug from the 2009 Disney / Pixar movie, Up, chasing a SQUIRREL!

Most commonly, however, this ligament slowly degenerates, and for this reason approximately 50% of dogs who have a cranial cruciate ligament problem in one knee will also develop one in the other knee at some point in their lifetime.

Diagnosing cranial cruciate ligament injury is relatively straightforward. A veterinarian will perform a complete physical examination; they will evaluate your dog’s gait (how s/he walks, etc.) and they will palpate the injured knee (proper palpation may require brief and mild sedation to allow muscle relaxation and to make sure your pet is as comfortable as possible during the examination). Abnormal knee joint movement is commonly determined using either the cranial drawer test or cranial tibial thrust test (see video via link below).

Radiographs (x-rays) may be performed to look for evidence of bone cancer. Occasionally advanced imaging (i.e.: computed tomography/CT scan or magnetic resonance imaging/MRI) is beneficial. A minimally invasive procedure called arthroscopy may be used to explore the inside of the knee joint to evaluate the cranial cruciate ligament and other joint structures, particularly the medial meniscus.

Once a cranial cruciate ligament rupture has been confirmed, treatment to stabilize the affected knee should be pursued as soon as possible. Both surgical and non-surgical interventions are available. Common surgeries are classified as osteotomy (bone-cutting) procedures and suture techniques (those that mimic the function of the ruptured ligament).

Let’s take some time to discuss each of these surgeries.

Extra-Capsular Suture Stabilization: Sometimes this procedure is called lateral fabellar suture stabilization or the “fishing line” technique. Regardless of the name used, it is the traditional surgical approach for cranial cruciate ligament rupture. A very thick suture is used to replace and mimic the function of the ruptured ligament (see photo below courtesy of Dallas Veterinary Surgical Center, www.dfwvetsurgeons.com). The special suture stabilizes the tibia (shin) with the femur (thigh bone) to allow normal knee movement; scar tissue will also form that further stabilizes the knee joint. This procedure is more commonly performed in small breeds and inactive dogs, and is typically not the surgery of choice for large and giant breeds. 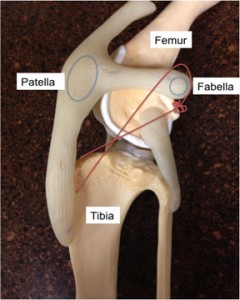 Tightrope®: The Tightrope® is an implant made of a kevlar-like material called FiberTape®. The Tightrope® procedure involves a surgeon making an incision over the inside or outside aspect of the knee (see photo below courtesy of Arthrex Vet Systems, www.arthrexvetsystems.com). Two bone tunnels are carefully drilled, one through the femur (thigh bone) and one through tibia (skin) at very specific locations and orientations. The FiberTape® is passed through both these tunnels and anchored at each end using toggle buttons. The FiberTape ® is tightened at the tibial exit point until the knee is palpably stable. The decision to perform the Tightrope® procedure depends on size, age, condition, tibial slope, and activity level of a dog.

Bone Anchor/FiberWire®: The bone anchor technique is a form of extra-capsular stabilization that uses a small screw-like implant (bone anchor) and a special multi-strand orthopedic suture called a FiberWire®. The bone anchor and FiberWire® are placed at certain locations across the joint to mimic the actions of the cranial cruciate ligament (see image below courtesy of Arthrex Vet System, www.arthrexvetsystems.com). As with the traditional extra-capsular suture stabilization, this technique promotes scar tissue formation that further stabilizes the knee. 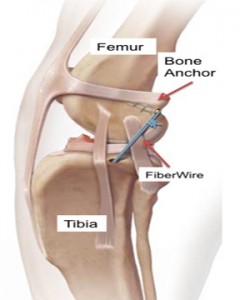 Tibial Plateau Leveling Osteotomy (TPLO): The TPLO surgery is a patented procedure that requires a veterinarian to complete a specialized training course. All board-certified veterinary surgeons in the United States have completed this course, and only those who have completed the training course can perform a TPLO surgery. The surgery involves a surgeon making a circular bone incision (osteotomy) in the top of the tibia/shin (tibial plateau) to allow rotation of contact surface of the bone until it is approximately perpendicular to the patellar tendon (leveling). This orientation renders the knee joint relatively stable (see picture below courtesy of the Animal Medical Center of Southern California, www.animalmedcenter.com). 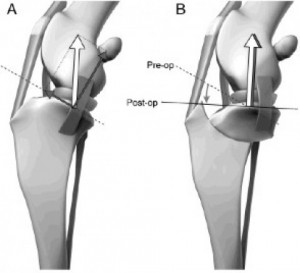 The circular bone incision is stabilized with a bridging bone plate and screws (see image below courtesy of Synthes, Inc., www.synthes.com). 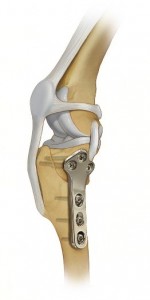 Once the bone incision heals, the bone plate and screws are not actually needed, but they are not commonly removed unless an issue with them arises. Many board-certified surgeons prefer the TPLO surgery for young active dogs and those weighing more than 18 kg (40 pounds). This procedure has been documented to be superior compared to suture stabilization techniques in large and giant breeds.

Tibial Tuberosity Advancement (TTA): This goal of this surgery is to move a part of the tibia/shin (tuberosity) forward (advancement) so the knee joint is stabilized by reducing cranial tibial thrust (see photo below courtesy of Dallas Veterinary Surgical Center, www.dfwvetsurgeons.com). This procedure is most commonly performed in patients who are not ideal candidates for a TPLO surgery or who have multiple problems in the same knee. 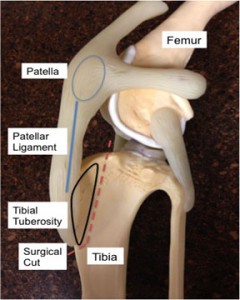 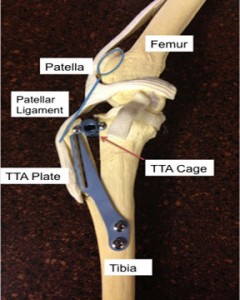 Non-surgical approaches include rehabilitation therapy, activity restriction, weight optimization, and anti-inflammatory therapy. None of these are true treatments for cranial cruciate ligament rupture because none of them stabilizes the injured joint. For this reason, this form of intervention is not ideal, but may be considered for those patients with relatively inactive lifestyles, those who have other concurrent diseases that make general anesthesia a risky undertaking, and/or for those families with financial limitations.

Just as with people, the peri-operative use of knee braces (orthotic devices) may improve recovery time after surgery. However orthotics have not been shown to be a consistently viable alternative to surgical stabilization. With that being said, such devices may provide satisfactory comfort for those patients with other significant illnesses or for families with financial constraints.

Board-certified veterinary surgeons and sports medicine/rehabilitation specialists are actively exploring the using of new treatments for cranial cruciate ligament injuries. These including stem cell therapy and treatment with platelet-rich plasma (PRP), a special fluid that is injected into a damaged ligament  to help hasten healing.

Platelet-rich plasma comes from a patient’s blood that has been processed in a special centrifuge to concentrate the volume of platelets and to remove both red and white blood cells. When PRP is injected into damaged ligaments, cells in the tissue are stimulated to bring even more new cells to the injured site to initiate connective tissue healing, bone regeneration and repair, and promote develop me, there is no risk of the treatment being rejected!

Picking the most appropriate treatment for a pet with a cranial cruciate ligament injury is not always straightforward. One surgery type is not perfect for every pet! Consultation with a board-certified veterinary surgeon can be invaluable when selecting the best intervention for your pet. Remember any licensed veterinarian can perform most surgeries on your pet with your permission. So the question isn’t, “Can my primary care doctor do the surgery?” but rather “Is my primary care doctor the best person to perform the surgery?” If rehabilitation therapy is determined to be the best intervention for your pet, consultation with a board-certified sports medicine and rehabilitation specialist or a certified canine rehabilitation therapist (CCRT) can be instrumental in helping a pet lead a high-quality and comfortable lifestyle.

A great video showing 3-D animation of a dog’s knee joint and what happens when the cranial cruciate ligament ruptures http://youtu.be/CNymdzyRavs