Each October in the United States, various organizations strive to raise awareness of and funds for finding a cure for breast cancer in humans. Breast cancer, also called mammary cancer,  in dogs has both similarities and differences to the human condition. To end the month of October, I review the diagnosis and treatment of mammary tumors in dogs. Happy reading!

Just as humans are encouraged to perform self-examinations of breast tissue in an effort to identify tumors when they’re small, so too should pet parents frequently evaluate their pets’ breast tissue. This requires a basic knowledge of a dog’s mammary tissue. Female dogs have 5 pairs of mammary glands

Illustration of the mammary glands in dogs. Image courtesy of www.marvistavet.com

Approximately 60-70% of mammary tumors in dogs in either the caudal abdominal or inguinal mammary glands. Mammary tumors are the most common tumor seen in female dogs, and the risk for developing a breast tumor increases with age in those who have not undergone ovariohysterectomy (been spayed):

Multiple studies suggest hormones like estrogen and progesterone likely play a role in the development of mammary gland tumors. Thus the use of hormones therapeutically also increases the risk of benign mammary tumors in dogs.

Mammary Tumors: Getting A Diagnosis

Approximately 50% of all breast tumors are cancerous, and about 50% of them will spread or metastasize. Remember our previous discussion about when pet parents should have a skin mass evaluated by a family veterinarian:

Many masses associated with or under the skin (also called subcutaneous) are initially evaluated with a simple and non-invasive procedure called a fine needle aspiration or FNA. Unfortunately, FNAs of mammary tumors do not reliably differentiate between non-cancerous and cancerous disease. Nevertheless, an FNA is still quite helpful, as it can rule out other types of skin and subcutaneous masses. 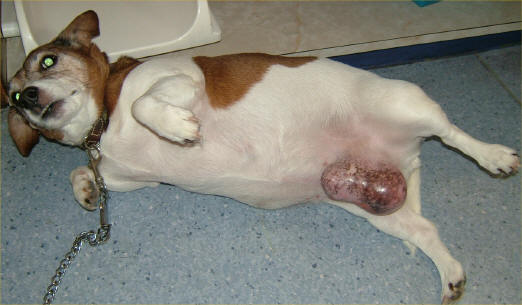 A large mammary tumor in a dog

If the results of an FNA test identify mammary tissue, then the mass should be surgically removed to determine definitively if it is cancerous or benign.

Surgery is the initial gold standard therapy for dogs with mammary tumors.

Depending on the size of the breast tumor, the surgical procedure can be minor or extensive. Possible surgeries include:

The regional lymph nodes (axillary and/or inguinal lymph nodes) are also often removed, especially if they are enlarged or firm, to screen for evidence of metastasis. Consultation with a board-certified veterinary surgeon can be invaluable for determining the best surgical procedure for your fur baby.

Staging is simply the medical term used to describe a series of tests performed to determine how much the body is affected by cancer. The staging tests for mammary cancer are non-invasive, and include:

Some of these staging tests are performed prior to surgery. For example, simple blood and urine tests are recommended prior to any anesthesia and surgery. Additionally many veterinarians obtain chest radiographs/x-rays prior to surgery to empower pet parents with information about the presence of lung metastases.

Following surgery, additional treatment, including chemotherapy, may be recommended. Recall our previous discussion about chemotherapy in dogs and cats. Simply stated anti-cancer drug therapy is a much friendlier process in veterinary medicine than it is for humans. Many factors influence the decision to pursue chemotherapy, including:

There are many chemotherapy protocols that have been investigated in dogs with mammary cancer. Recently a drug called paclitaxel (Paccal Vet®) received approval from the US Food and Drug Administration for treatment of non-resectable stage III, IV and V mammary carcinoma in dogs. Unquestionably consultation with a board-certified veterinary oncologist (or a board-certified veterinary internal medicine specialist if an oncologist is not available) is strongly recommended to empower families with the most up-to-date information they need to make an informed decision about chemotherapy.

Tumor stage has also been shown to affect survival time. For example, dogs with stage I disease have reported 97.9% 1-year and 2-year survival times while those with stage IV disease have 13.6% 1-year and 2-year survival times. Tumor size also seems to affect prognosis. Those dogs with breast tumors less than three centimeters in diameter have significantly better prognoses. In another study, patients with tumors larger than five centimeters in diameter were more likely to develop metastases than those with smaller masses; these patients were also seven times more likely to die within seven years. Furthermore, studies have shown dogs with no metastases were more than three times more likely to be alive one year after diagnosis.

Several other factors have been associated with a poor prognosis for dogs with mammary cancer, particularly:

The take-away message about mammary tumors in dogs…

Mammary or breast tumors are extremely common tumors in female dogs. Early identification and removal are essential, as surgery can be curative in ~75% of affected patients. Consulting and partnering with board-certified veterinary specialists in surgery and cancer treatment can be uniquely helpful for developing efficient and effective diagnostic and treatment plans.